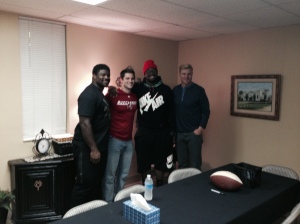 Last night I had the honor of serving as the emcee for an event our church hosted called “Sports Talk: Going Deeper with the Bucs.” Four Tampa Bay Buccaneers players—Gerald McCoy, Josh McCown, Clinton McDonald and Alterraun Verner—spent time sharing how their faith impacts their life on and off the football field. And it was awesome!

Each player volunteered to be at this event and it was clear they wanted to be there. They were real and down-to-earth guys. They were honest about their team and personal struggles. They were genuine and humble. And they boldly shared about their faith in Jesus Christ. And I mean BOLDLY. I was challenged and encouraged in my faith throughout the night and I know everyone else there was too.

We could not have asked for a better group of guys to be with us. They represent the best the NFL has to offer and they served their community well.

That’s the area where you live. It’s sometimes defined as a small area and other times as a large one. Where I live, there is the greater Tampa Bay community and then smaller communities within that larger one. Last night the event was held in one of those smaller communities of Tampa Bay—Palm River.

See Bell Shoals is a multi-site church with 4 community-focused locations throughout the greater Tampa Bay community. This event could have been held at any of our campuses, but Palm River was strategically chosen.

Because Palm River needs hope. It’s one of the poorest areas in Tampa. It experiences quite a bit of crime. Many people continue in the same cycle of unwise decisions their parents made. Many lack education. Thousands need Jesus. And every person who lives here is precious and loved by the God who created them.

Palm River has often been forgotten or avoided by those who do not live there, but last night a statement was made: a church and a group of NFL players love them. And that’s huge. Because a community like Palm River often doubts whether the outside world even cares.

There was one young boy in particular who I know doubted last night. This boy was a Bucs fan who came with his dad, but once arriving at the event, wouldn’t get out of the car. One of our volunteers went over to the boy to encourage him to come out and see what was holding him back.

He said, “They wouldn’t come to my neighborhood.”

Those six words played over in my head all night. There had been tons of publicity in the community, but that didn’t convince him. He didn’t believe the Bucs were coming to Palm River. And he had every right to doubt based on what his experience told him. He may have never seen high-profile, successful, well-to-do people in his life come to his neighborhood. Thankfully he got out of the car and he saw that the Bucs really did come!

But how many people just like him think the same thing? Not just that the Bucs wouldn’t come, but that people of influence who can make a difference really wouldn’t come and ultimately don’t care?

There are thousands of communities all over the world that are forgotten or avoided by the church because they are unattractive or unsafe. But those communities, those neighborhoods, are exactly where the church needs to be.

It’s exactly where Jesus went when he was on this earth.

He ate with sinners.

He talked with prostitutes.

He healed the sick.

He helped the poor.

He went to messy, tough, unpopular people and places.

And if the church is going to shout the message of Jesus we must go to the people Jesus would be going to if he were here today.

And I think he would be at a community like Palm River.

“People don’t care how much you know until they know how much you care.” I’ve heard that said a lot in the past, but it was more true to me last night than ever before.

The church has to stop yelling at people the truth about Jesus without showing the love of Jesus. We must lovingly share the truth. We must show we care. In the process we will look a little more like Jesus than we ever have before.

I don’t know where the needs are in your community, but find where they are and go to them. Serve those people. Love on those people. And show them that you really do care. You never know. There might be a young boy who doubts whether anyone really cares. And you could be the difference that God uses to redirect his life.

What are some ways you could reach out to your community?