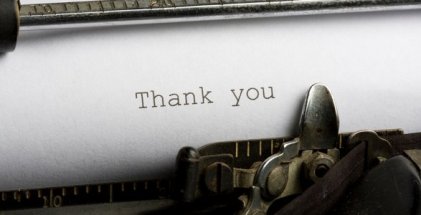 Several years ago I was at a Sunday morning church service on either Veterans or Memorial Day weekend. I can’t remember which it was, but the focus that Sunday was to honor our military. One way they did so was by bringing in a veteran to speak. He told war stories and spoke of how God had worked in an incredible way in his life while fighting in Vietnam. The one thing I will never forget from his message is what he challenged everyone with. He said, “Whenever you meet someone who has served in our military, say ‘thank you.’” From that day forward I decided I would if I got the chance.

Not long after hearing that challenge I was in the gym at UNC-Charlotte. I happened to meet a guy who was now a student and formerly had served in the military. Once we had exchanged names and I learned his story, I casually but genuinely said, “Thank you for serving our country.” What happened next will never leave me. He accepted my thankfulness with a “you’re welcome” and went on with his workout. Several minutes later he came back to where I was working out. He had tears in his eyes and said, “No one has ever thanked me before today. Thank you.”

Here’s what I learned that day: “being” thankful is great. But saying it is better.

Why? Well obviously, nobody knows you are thankful for them if you don’t say it. But more than that, something special happens for both the one giving and receiving thanks when it’s said.

When someone receives a “thank you,” it gives them a sense of self-worth and affirmation. It encourages them in who they are and what they are doing.
When you give a “thank you,” it reminds you that it’s not all about you. You acknowledge your dependence on someone else and realize others’ contribution to you.

1 Thessalonians 5:18 says, “Give thanks in all circumstances, for this is God’s will for you in Christ Jesus.”

Again, not just be thankful, but give thanks. Say it.

Daily, someone invests in you.

Do they know you are thankful? Are you?

Instead of just being thankful or listing all the things you are thankful for on Facebook, find someone to say “thank you” to today. Make a phone call. Send a text message. Shoot an email. Write a note. Or be bold and tell someone in person how thankful you are for them. It will change them and you in the process. And oh yeah, it’s God’s will for your life.